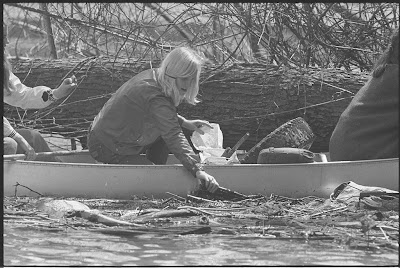 My post this week begins on the Potomac River ( forty-two years ago) with three young ladies, in a canoe in April during a spring river clean-up. Their Girl Scout Troop was brought in to pick up the massive amounts of trash- and it's the best I could find to match
minus the men
Kat's theme-photo
and yes! Kat's
still on board carrying out our Sepia Saturday sailings until
Alan returns. 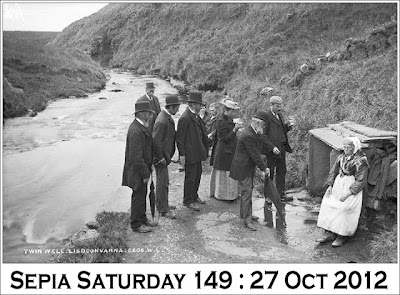 But- we leave this lovely group situated at the Twins Wells- on the River Aille- so I may close my short tribute to photographer, Arnold Genthe.

From all the many photos of him always on the arm of a different woman, he must have been quite the ladies man.


Known as Dean of idealistic impressionism on the west coast. 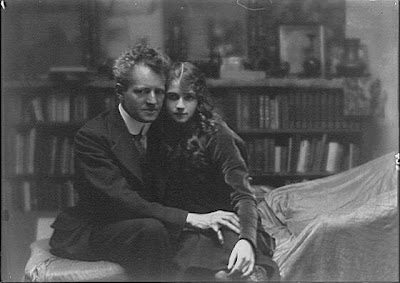 Arnold Genthe and another unknown woman friend, inside his studio in San Francisco.
He had many women friends, but he never married. 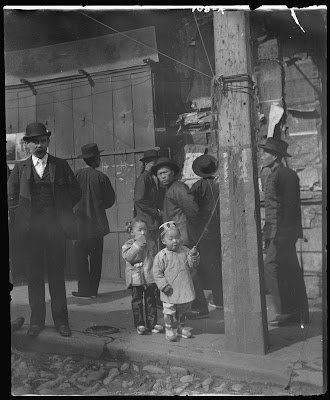 Genthe's Two Children
in Holiday Dress
in
Chinatown
and included in his Old Chinatown book.

Kat while graciously holding down the fort at
Sepia Saturday
brought the ingenious word photo bomb to life just last week
and I'm thinking the blurry man that is looking (rather scornful)
wasn't what Arnold had intended on in his photo of these
two adorable children.
These children appear often in his photo-book. 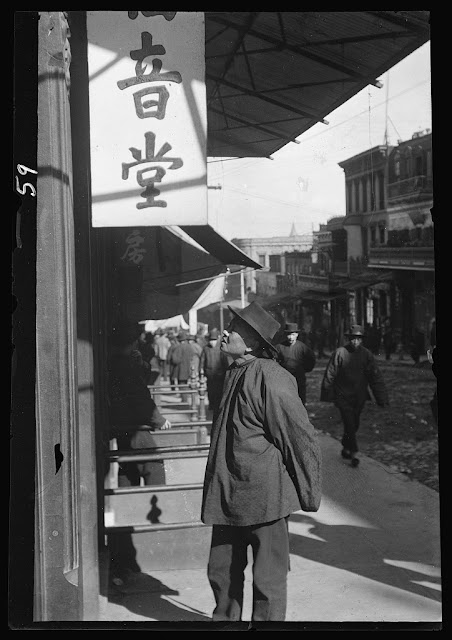 I believe this is my most favorite Arnold Genthe photo.
I'm guessing, this man had no idea his picture was being taken.

The imagery is remarkable from the shadows falling perfectly to the expression on this one lonely man stopped along a busy street in Chinatown. I've been to Chinatown in San Francisco and it's always been busy. 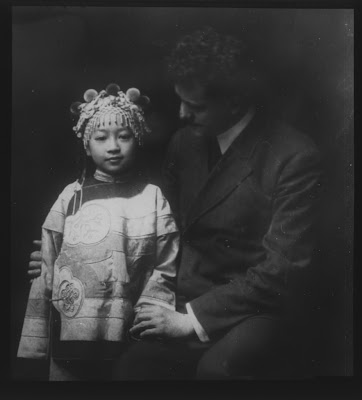 Also taken inside his San Francisco studio- this photo also appears in his book
Old Chinatown
a book of pictures by Arnold
text by Will Irwin
New York: M. Kennedy 1913 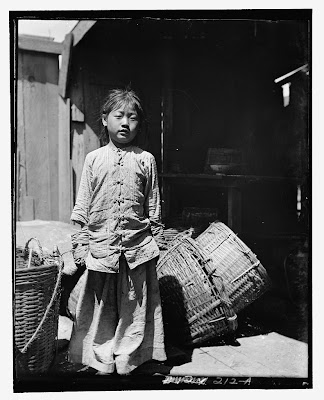 
Was it his fondness for the water, or the people he met? 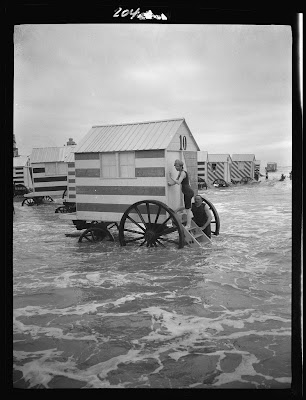 These photos were simply marked 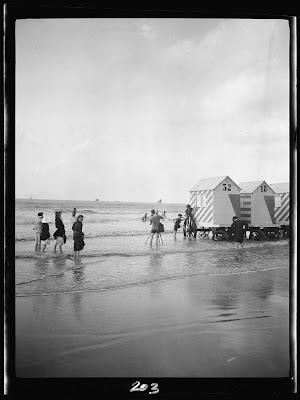 Do you see the photographer set up in the water that Arnold caught?
I can bet one or both of the ladies to the left of this picture may have ended up in front of his camera as well.
They seem to be focused on him.

Genthe took pictures of a lot of famous people and many from Hollywood.  He was one of the few photographers that Greta Garbo allowed to take her picture and he took quite a few (all are right protected and I can't post) but-

if Hollywood wanted to make a movie about their once go-to-photographer -
I know the actor that could quite possibly pass as (or is) a distant relative. 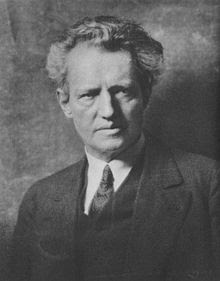 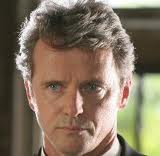 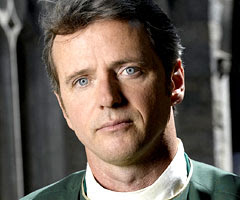 What do you think?  He'll need very little time in make-up!

"I was determined to show people a new kind of photography: there would be no stilted poses; as a matter of fact, no poses at all. I would try to take my sitters unawares, at a moment when they would not realize that the camera was ready. I would show them prints in which a uniform sharpness would be avoided and emphasis laid on portraying a person's character instead of making a commonplace record of clothes and a photographic mask." --Arnold Genthe

He succeed on all counts.

ALL these pictures you've chosen for your saturday sepia...are perfect, karen!

have a happy weekend!

It is interesting to think of how the development of the camera enabled different photographic techniques. Candid shots would not have been possible when folks had to be still for long periods of time. Arnold's shots are masterful and well framed. They really do capture a moment in time.

It's too late now but a young Spencer Tracy would have been the ideal man to play Genthe.

The Chinatown photos look so natural especially the two you girls.

All these pictures are interesting, but my favorite is the studio picture where the man is in shadow and all the light is on the little girl.

It's always good to be introduced to a 'new' photographer. The Chinatown pics are really interesting, but why am I a wee bit disturbed by the one labelled 'Friends'? It could be just me of course. Bob beat me to it, as Spencer Tracey popped into my head too.

Hi Karen, this is a very wonderful post! I hadn't heard of this man before. I loved the old S.F. Chinatown pictures and the others too. Thanks so much for sharing these with us.

Have a fun time with those grandbabies making cousin memories for them all.

I would be worried if I was trying to use one of those almost floating little wheeled cabins.

I'm so glad I popped by - these photos are beautiful.
There is a China Town in Victoria and it is, supposedly, older than the one in San Francisco. It is always busy too, and there are some wonderful old photos of it from the last two centuries.

Thanks for focusing on the work of Mr. Genthe. His work was exceptional and I think Aidan Quinn is the perfect pick to portray him. Love the photos you chose for this post - my favorites are the images of the Chinese children. They are adorable! My children are adopted from South Korea, so I happen to be partial to Asian children and think they are both beautiful and photogenic.

Little Nell, I don't really know why he used the title friends, but that's all he had listed with it. I do know he admired the children in Old Chinatown and took many photos of them for his book about Chinatown.

Beautiful pictures! I guess it is also the black/white effect that is part of the attraction. Aidan is certainly a perfect look-alike. I was surprised to read that already 42 years ago there was so much trash in the Potomac River.

I hadn't heard of this photographer either. I love his photos of Chinatown and also the European beach scenes.

Thanks for introducing me to the photography of Mr. Genthe. They are wonderful! And I think you've picked the perfect likeness in Aiden Quinn.

You'd be good at casting, Quinn seems like a good choice. Loved this journey in Genthe's world.
Thanx 4 sharing!!
:)~
HUGZ

I'm really enjoying the Genthe collection, Karen, but I have to disagree about Aidan Quinn (although I would pay to see him in ANYthing)!

I'm thinking Sean Penn would be good for the role. Aidan has that soft baby-faced Irishman look. Penn is a bit more rugged and his hair is ideal!

By the way, are you watching, "ELEMENTARY", the new Sherlock-Holmesian detective show? Quinn is the Police chief and does an admirable job.

Thanks for introducing me to Genthe, previously unknown to me. I like the photo of the man in Chinatown garb looking up at the sign as though to say, "Say what?"" I was wondering about what's aphoto bomb..see so much missed while life has kept me otherwise busy.

I've never been to a real chinatown. Although in Amsterdam there is a quarter with several chinese buildings; it is strange to see those houses in between the old stepped gables.