This week I'm skipping over to my grandmother's family on my father's side.  May I introduce, 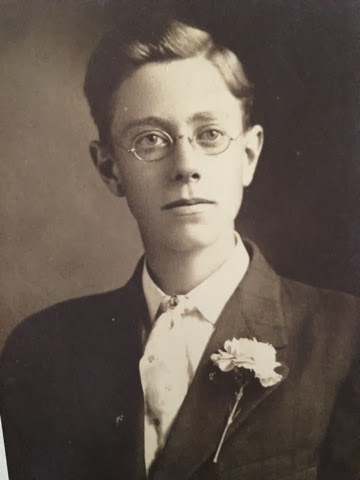 
He also happens to be my grandmother's first cousin (on her mother's side of the family) and this photo (on the other side) declares he was her first school teacher. 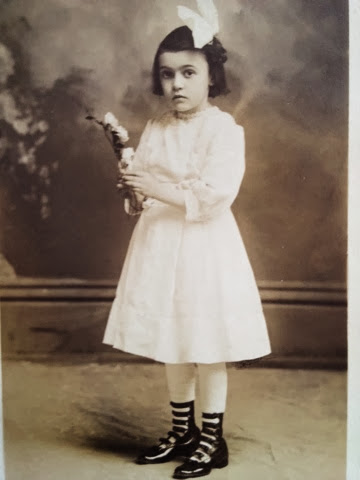 My grandmother, Ada Harriet, is my father's mother.
This photo of her, could very well be a photo from about the time Roland Welch was her teacher.

This ancestor challenge is
Sponsored by Amy Johnson Crow, from "No story too small" at this link

Where each week we write about one of our ancestors.


I've always known that he was a teacher, but I had no idea, until reading his draft registration that he was also, a truant officer. I find that very interesting.  Of course, when school was out during the summer, he was busy working as a farmer, as many did back then.

Holt, Michigan is where he first taught.

A brief bit of history about Holt, Michigan,  about the time he became a school teacher, and more here, thanks to Face book.


Apparently, his home town of Mason, and the city of Holt, where he eventually lived, weren't suitable enough for him and he moved his family to the much larger city, Detroit, Michigan.  I'm not entirely sure what date, but sometime before his marriage to, Vera L. Connell on July 28, 1920.   They had a daughter, Patricia A. born in 1928, also listed as being in Wayne, Detroit City, Michigan. The 1940's census lists them still living in Ward 16, Detroit, Michigan, with their one daughter, Patricia at the age of 12.

Later, they did something quite different from their other relatives.   They moved to Florida.

Dated from June 5, 1917 is Roland's draft registration can be seen here.

His draft registration is rather interesting and worth a look. He is described as tall, and slender, with blue eyes and light brown hair.  His present trade is listed as, Truant Officer and teacher in the city of Detroit, and that he works on a farm in the summer.  The farm, is quite possibly part of the family acreage in Delhi Township, Michigan.

I discovered this little poem on the Ingham County and Delhi Township ancestor's site, written possibly by a student?  The author is unknown, but the poem is very fitting for their day.

You were my queen in Calico,
I was your bashful barefoot beau,
and you wrote on my slate,
I love you, Joe.
When we were a couple of kids.

I hope to research more regarding Roland, as it seems further depth is required to fill in the blanks from their leaving Michigan, and eventually taking up roots in Florida.

As it appears, he died on February 1, 1972 in Pinellas County, Florida.

I present this question to you.  Roland A. Welch, is my grandmother's first cousin, so what would you say his relation is to me?

Oddly enough, I used to walk home from elementary school and when I was older, like 4th grade I would take the long way home through this park!

What a nice photo of little Ada. As a child, I would have killed for socks and shoes like hers! I always had this thing about stripy socks, but I had forgotten until I saw the photo!

Interesting going back in to your famly history.

You took all these photos with your 'back to the future' cell phone, didn't you?

great that you have the family photos :)

Absolutely I did! LOL

Absolutely I did! LOL

wonderful that you have this info to pass along!

What a wonderful way to review history and learn about yourself and your family. Love the photos. Blessings

I envy you being able to track down your family's history--especially in such detail. Well done!

Yvonne - Yes, thank you for saying that. I'm just now putting all those wonderful words to paper!

The more I look at Roland I can see my grandmother as well!


Good write-up. I definitely love this site. Keep it up