Email ThisBlogThis!Share to TwitterShare to FacebookShare to Pinterest
Labels: spring is near, winter 2010-11

I find this week’s Sepia Saturday 63 fascinating for various reasons. When anything relates to ships or water there are so many courses one can sail......If you desire more information for playing along too just go here


So my Sepia Saturday begins this week's theme about the great Four-masted barque, "Richelieu"
and my bond and attraction to water with stories from the sea or other waterways.   "Richelieu" refers to- a French prelate and statesman, principle minister to Louis XIII (1585-1642), was the name-ship of a class of French battleships in WWII, is an airport in Quebec, Canada, also a river, a color and so much more.

So many boats, so little time…here are just a few.  A most interesting note is the building of ships, their christening, names given and later renamed, the labels/flags/names they carry (for country too) the ports they visit, and often their momentous demise, or rebirth.

The changing or reissuing of past names can confuse things....you see the French had another more famous ship named "Richelieu" later which was a battleship....in her honor I present several other vessels much like that French navy battleship.......

Now for a maritime disaster in Chicago, Illinois .... about a much documented ruin of the Eastland.  These images are from postcards from an antique store.
Just what happened?  The S.S. Eastland based out of Chicago was a passenger ship used for tours.  On July 24, 1915 she rolled over while tied to a dock on the Chicago River.  A total of 844 passengers and crew were killed in what was known as the largest loss of life disaster from a single shipwreck on the Great Lakes.  Following that disaster, the Eastland was salvaged and the United States Navy bought her and designated her as a gunboat (here we go again) renamed, USS Wilmette, and primarily used as a training vessel on the Great Lakes and was scrapped following World War II.

In her touring days they called her "Speed Queen" of the Great Lakes.  Sadly she was known to have too many flaws, too top heavy, her center of gravity too high, and she was over crowded once in 1903 causing her to list and water to flow up one of her gang planks.  So many incidents proceeded even a mutiny ensued on the 14th of August 1903 while on a cruise from Chicago to South Haven.

Flipping over to my father's scrapbook a look at a saying and a long time treasure.....

I close this post with sort of a mystery on the water.


Going back to a family album this grouping of photos remains a mystery to me yet.  (I won't post them all) All are untitled, no story quotes and pasted in the middle of photos from  and .  So your guess or knowledge could solve this unidentified collection of ship disasters.  For the purpose of this post my best presumption would be the location , in and around the military fort located there.  Please offer any information if possible.
heavy bursts of smoke...drifted away.....clouds sailing calmly as though nothing had happened...
﻿
﻿
like lost soldiers never to return home again...

Through the smoke churning up on the right side of photo you wonder if something wasn't brewing on shore as well?
.....and so ends this brief flash through life on the water......and just a short few of the very many vessels that have roamed our world......just as ships will forever more pass by in the night...so live long those lives that live by the sea...
Posted by 21 Wits at 12:48 PM 17 comments:

Good morning again everyone......welcome to this new adventurous week of Saturday Centus! ..and yes thank you Jenny for such an easy going, rich fulfilling, non-wicked, kind of silly.... prompt today!  If you have no idea what I'm talking about just go here

Sure already late for work with a flat tire so hubby graciously gives me his enormous truck.  Of course the freeways blocked so cursing (not really) my way through slow city traffic I spill my coffee after a long wait at the coffee drive-thru.  My bank isn’t open yet so walk-up ATM it is.  Wonderful it’s snowing again, as I slip on ice getting out of truck.  What next I ask, taking off my glove when unexpectedly the ATM machine began dispensing twenties right before my eyes!
Posted by 21 Wits at 8:24 AM 12 comments:

Welcome, welcome....and good morning.....I'm on time today! Okay I actually thought this up yesterday...you caught me and if you want to see what all this 6WS aka as Six Word Saturday is all about go here
http://www.showmyface.com/2011/02/six-word-saturday_26.html

Ecstatically happy over some wonderful secret!
Without pleasure man would live like a fool and soon die. - Pierre de Beaumarchais
So then, I 'll be living fully and enjoying life.......and I'll be....a wishing and a hoping for SPRING too!
Posted by 21 Wits at 6:56 AM 12 comments:

Not To Dare is To Lose Oneself

My Fantasy Makes Me Feel

Email ThisBlogThis!Share to TwitterShare to FacebookShare to Pinterest
Labels: Apples Over the Moon, life's journey, Stillwater

Say a little prayer tonight for someone who might need it more than you think...... good - night and happy dreams!
Posted by 21 Wits at 11:02 PM 3 comments:

Rolling right into another Sepia Saturday theme this 19th of February there are numerous inspirations from first glance which are still wheeling through my thoughts. Oh which path should I take? If you have something to offer by way of this week’s theme or your own Sepia Saturday thoughts just go here
http://sepiasaturday.blogspot.com/2011/02/sepia-saturday-62-saturday-19th.html

Sepia Saturday's theme photo is in.......Ipswich, Queensland, once called, “Terra Australis-Incognita – “an unknown land of the south,” Australia awaits with Ipswich being an urban suburb southwest of the metropolitan Brisbane some 40 kilometers (25 miles) south. Ipswich is situated on the Bremer River, so they’ve had their share of flooding, and was named in 1843 after the town of Ipswich, England- the name (Ipswich) is derived from the medieval name Gippeswick, also Gipewiz or Gepeswiz probably from the river Gipping and this Australian town was first settled in 1827 when limestone was mined there.

Isn’t it amazing how something so minor as a bicycle is useful but can go unnoticed in many photographs from years ago? Then after the mention of them you can spot them almost everywhere.


Even more interesting to me is observing places with names begging to be uncovered. In fact Sepia Saturday's photo showing a jewelry business was first opened by William James Prouds on Pitt St. in Sydney in 1903 and became the largest and most trusted jeweler’s chain in Australia.

Now to add some photos from two of my family's old time photo albums with photos or postcards depicting bicycles and shopping centers of the city...... I find bits and pieces of the shops names in these photos extremely interesting while playing Sherlock ........
﻿
﻿Now for a mix of bicycles and strolling along d'Orleans, Pithiviers is found in Loiret in the Lire Valley regions of France, and Pithiviers is also a delicious "almond cake that comes either in a puff pastry (best known) or as a fondant cake...with fruit decorations."  Perhaps they are biking to their favorite pastry shop below!


Below is a dealership for the Citroen, a vehicle I hated as a little girl on my first European trip, but today they are a favorite of mine.  Perhaps you've seen the actor Simon Baker's Citroen on the television series "The Mentalist" a favorite show of mine......and what a fascinating building too!


This last photo stood out with the man appearing like ....he was walking while chatting on his cell phone, don't you think?  The place is actually where you can take a bicycle tour in France,  Le Vieux Moulin - Loire Valley Bike Tours and you can enjoy a bicycle tour from the comfort of their secluded country estate and explore wine valleys and apparently so much more.  Are you ready to see for yourself?

It's Whimsical Wednesday again and I changed things a bit by playing with scraps of paper and tiny jewels!   If you desire your own special whimsy join in here http://dthaase.blogspot.com/2011/02/whimsical-wednesday-wk-14.html

The more playing the merrier!  So surprise yourself with a gift of whimsy! 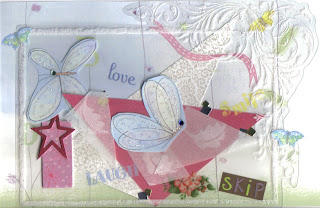 There are no wrong turns or shortcuts to anywhere worth going!

Happy ...Whimsical Wednesday....it's time for more whimsy of any type really....it's not just about grabbing pen and paper.....they accept all kinds of whimsical things.....for pure whimsical delight!    So if you desire to hop along at Whimsical Wednesday just go here http://dthaase.blogspot.com/2011/02/whimsical-wednesday-wk-13.html 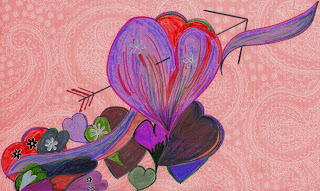 So many hearts--so little time
Love without gladness--Is pure sadness!

Good wishes to all whimsical, artists, fairies and other such blogger friends, today opens a new week in Whimsical Wednesday. Where you create your own theme!  So, if you want to toss one in too....
http://dthaase.blogspot.com/ 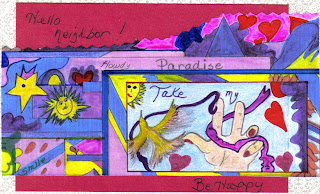 Wave All Your Fingers at Your Neighbor Day
Always February 7th