WELCOME WHIMSICAL WEDNESDAY wonders.......it's so good to unleash the scribble-squiggles within me today!

﻿
﻿ If you feel like joining in on all this artistic whimsy then why not check out their blog so maybe you could join us too!...the more the merrier ....right!

THEMATIC PHOTOGRAPHIC this week is perhaps a bittersweet topic.  Something some of us would rather avoid, while bringing joy to others....then there are those of us who just do it when necessary.... and it's called .........  SHOPPING!

So, yes indeed....off to market we shall go all week long!  If you feel like sharing your own shopping adventures please do here


Really shopping is what we do out of necessity, but it can be an adventure too, if you let it.....

and just out of utter curiosity I wonder how much the paint cost on that extremely RED building? Did they shop around for the best bid?


Today's shopping tip: You can get shoes for less than a dollar at the bowling alley!  and if you want to see more shopping adventures...don't forget to check out Carmi's blog, at Written Inc. and see what great shopping you can accomplish!

Welcome to another Saturday Centus

Here is my prompt

“Surprise! I’m pregnant!” Or, “Is it a pregnant spaceship?” are commonly heard after seeing the Jacob Harder house. Being an architectural nut I had to see for myself; even after hearing a fire destroyed it.

Seriously, only an architectural genius could have designed this magnum opus residence; for the entire world to study its faded-pea-green, fish-scale-like shingles, and bulging framework that no other circular dwelling could ever match. Everyone at the local café buzzed about its blueprint being of celestial design.
My anticipation surmounted as the GPS commands stopped at 207 N. 8th Street. I couldn’t believe my eyes when I saw........ 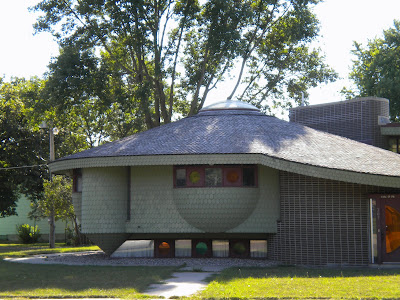 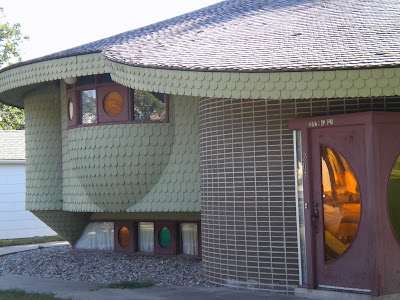 Yes!  It still stands today!  Swelling in places just like they said it did and... 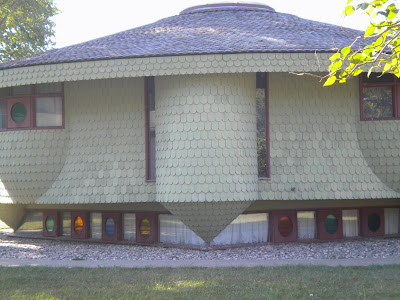 Maybe it being a "Spaceship" isn't such a silly idea....
and I think I see where....the idea of a house appearing pregnant might not be too far off either... 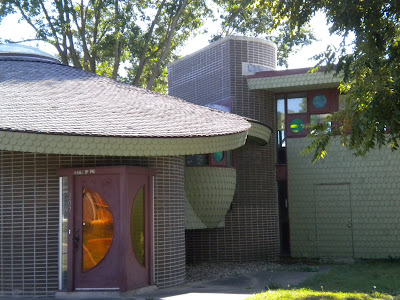 So thank goodness a fire did not destroy the Jacob Harder House, and just to mention it is a private residence, even if it is the strangest house not just on the block but quite possibly in all of southern Minnesota!

Jenny and the rest of us will be glad you did!

SHARING WHAT'S INSIDE YOU,
IS MORE

It was only a sunny smile,
And little it cost in the giving.
But like morning light, it scattered the night,
And made the day worth living.
- Anon, although some places quote F. Scott Fitzgerald as saying it.

Did you know, a smile heard in your voice is bigger than the one on your lips?

So go out there and smile....like you've never ever smiled and see the whole world smile back....   and if you feel like sharing your own thoughts or feelings for Six Word Saturday, I know Cate and the rest of us will smile brightly if you do!

Just check it out here

Thanks Bethe! For my Irresistibly Sweet Blog Award 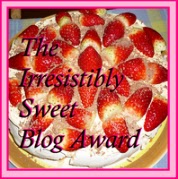 Oh my goodness I'm blushing....can't you tell?  I've been given the sweetest ever award fro, Bethe at "Daily Journey Blog"...one that you will be happy and blessed to have checked out.....our blogs came together from another sweet dear Lady Miss Jenny....with her wondrous blog fun free for all... Saturday Centus!  ...another blog worth checking out!

With this wonderful gift comes rules.....of course, where I must tell you seven things about Me!  ...Then I may offer this award to seven other lucky blogs.....which this will be tough....and I have been nearly pulling out my hairs...and thinking choosing straws would be best....but never fear....at the end will be seven other Irresistibly Sweet as ever blogs....awarded!

1.  I am a gigantic fan of romantic movies but I'm hooked on flicks like
Unstoppable.....already watched two times and still can't sit still    through it!

2.  I secretly dream of being a paid "Travel Writer"

5. Wishing for a house with a wide wrap-around porch by the sea.....

6.  Wondering why Minnesota can't have more days in the summer?

7.  Pledging to myself to enjoy 10 new and exciting things to do for the next winter approaching far too soon....


The awards go to:

Welcome whimsy wonders on this wondrously Whimsical Wednesday...wishing you all the whimsy you can whirl in one wonderful way....

It's Wednesday so if you feel the call to draw or create .......go here
http://dthaase-lines.blogspot.com/p/whimsical-wednesday.html
Tomorrow brings the State Fair

A time for fun and despair


Means summer is soon to an end


Reflections of long days and fun


Seems not long ago had for us begun


Will soon fade away you see


You at the fair


But if only it wasn’t so


That soon summer will go


Summer I’ll miss you so

Welcome to Thematic Photographic....and this week's theme is all about VIBRANT....
If you're new to this game from Carmi's blog ....Written Inc. it's called Thematic Photographic, where Carmi offers a new theme every week......and we respond with a photo or photos related to that theme.........in pretty much any manner that we choose!  If you want to play along too, or just view more VIBRANT photos...go here

Beauty comes in so many styles and vibrant shades....

"Behold the turtle.  He makes progress only when he sticks his neck out" - James Bryant Conant               Can you spot the swimming turtle?

Saturday Centus - If I die young

Welcome to another Saturday Centus brought to by, well myself, and of course Miss Jenny from "off on my tangent" and if you want to play along with us (you'll really love it I know) even if we can't use photos today, and just the word "die" is like an ugly word and not on my favorite word list like the exquisite word, young (yet, how young is young?)

If I die young, really? Well, that isn’t going to happen. I’m already past young, as far as birthdays go. Yet, on the other side of reason, where logic gets you from A to B and back again, I’ll borrow some wisdom from my best friend, Imagination, who sometimes really needs to be shaken up a bit, but always answers.

Together we are irresistible, with our arms slung about each other; we’ll blanket the streets like drunken buddies staggering from one amusing thing to another. All in the name of crazy gladness that we can act like we’re young, even if we’re a tad bit older than young!


So have I twisted your arm, come on tell me I have!  Saturday Centus is where we can just let everything go and be young again ...if you know what I mean!  Check more out here

﻿ ﻿﻿
﻿﻿ ﻿
﻿ ﻿
﻿I hope you enjoyed this California journey with me and if you feel like seeing more Sepia posts or want to post your own PLEASE DO!  It's great for tourism too! Go here quickly
http://sepiasaturday.blogspot.com/2011/08/sepia-saturday-88-saturday-20-august.html
Posted by 21 Wits at 5:53 AM 19 comments:

Six Word Saturday  has arrived today...... via Cate from "Show My Face" blog where she offers us an exciting way to say what's on our mind.... or in our thoughts...all of course in six words.

Why? Ever since Cate's trip to San Francisco, my heart can't stop thinking about going there again, (and including a stop over) it's only an hour's drive south of San Francisco to San Jose and the famous Winchester Mystery House!

A most interesting mansion with the world's strangest 160 rooms, that all began with an unfinished eight-room farmhouse and over the next 38 years Mrs. Sarah Winchester (heiress to the Winchester rife fortune) created a mystery that you can still visit today!

Also known as, "The Mansion Designed by Spirits" and will forever be both Beautiful and Bizarre, not to forget the unbelievable Gardens and Grounds about the sprawling mansion.

The Amusing and the Mysterious and all the curiosity in between will forever follow the memory of the late Sarah Winchester ....and FYI - the mansion is open for tours, facility rentals, special events, or even birthday party packages every day of the year except for Christmas Day.

Here's a link to filled with everything about the Winchester Mystery House.

Thematic Photographic 158 - Made of Glass

It's a brand new theme  "Made of Glass" that Carmi shines upon us this week for "Thematic Photographic" and if it's made of glass....he wants to see it.  If you want to add yours or look at other people's glass go here
http://writteninc.blogspot.com/2011/08/thematic-photographic-158-made-of-glass.html

Email ThisBlogThis!Share to TwitterShare to FacebookShare to Pinterest
Labels: Made of Glass, Thematic Photogaphic # 158

WHEN A PERSON IS LOOKING FOR "ROUGH" TRUST ME IT'S HERE 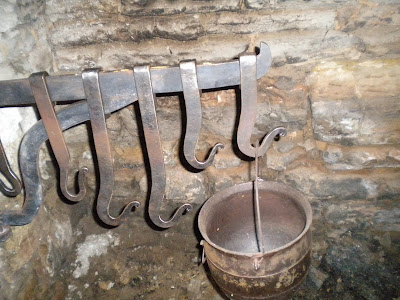 You can imagine how many items of food could cook here at the same time!
From inside of The Old Log Cabin House (museum) built in 1850...a whole lot of rough going on inside!
The greatest amount of "rough" both literally and figuratively was discovered inside the Restoration House built in 1856, and mostly in the basement where the first jail cell was located once the county of Dodge leased a portion of the house for the commissioners in 1858 to serve as their first court house as well. 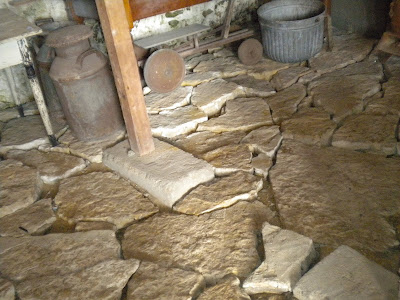 Lime stone was plenty in Mantorville and all of Dodge County.  Inside floor of basement Jail! ...the entire floor was made of this. 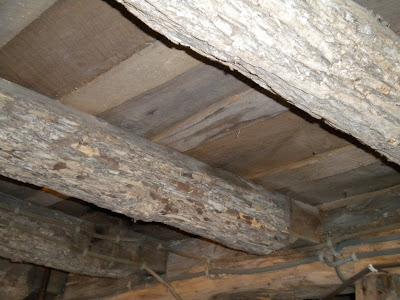 Ceiling in basement of Restoration House and this view very near the one and only cell.
This house was acquired by the MRA and they restored it as a late 1880's residence, but of course you will see later additions for electricity and heat......because we just don't live so roughly anymore! 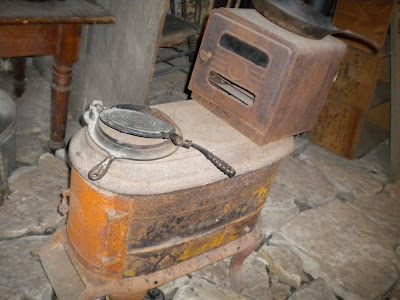 Inside the Jail....Restoration House basement....heat source and possibly where the prisoner's food cooked? 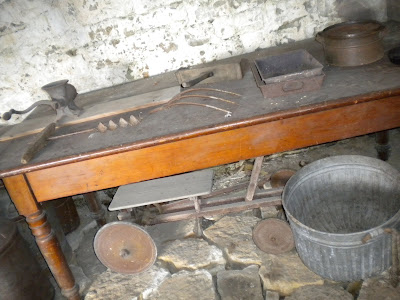 Working table inside the basement...... 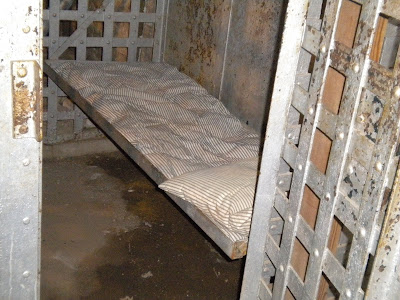 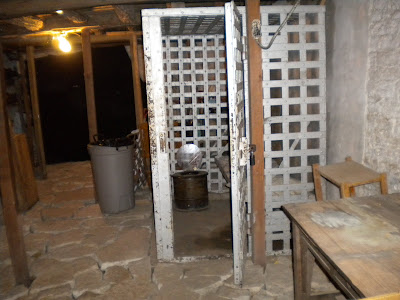 Well if it's a jail they needed a cell....how would you like to rest for a while in here?  Although during the hot summer one might be prone to get themselves locked up just for the coolness down here! 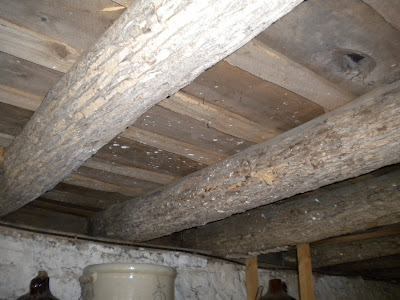 Ceiling again, because isn't it just cool how they just cut down a tree and used them for beams!
Just a quick stop a few miles north of Mantorville is the town Wasioja that was named after Indian Chief (Wazi-o-ju) who is believed to be buried near Devils' Staircase ...Wasioja means "River of Pines."  Much of this little hamlet of about 80 residents today still exists as it did at the turn of 19th century, except the Seminary as what is left is in ruins. 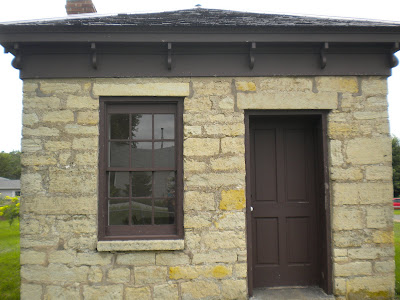 The Civil War Recruiting Station built of limestone by Colonel James George an original resident in 1855 for use of a bank and law office first, and 1862 the Union Army requested it's use. 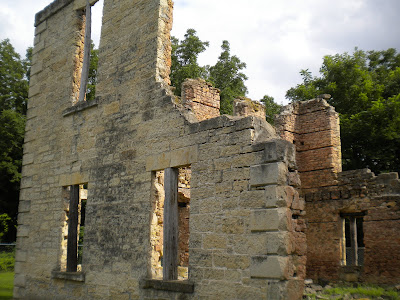 Seminary Ruins it was established in 1858 with an enrollment of over 300 prior to the Civil War. Built with Wasioja limestone from nearby quarries. It was a fire in 1905 that destroyed the building and this is all that remains.  A Monument to the soldiers of the Civil War is here as well.
I hope you enjoyed this glimpse into two very charming towns...with a whole lot more of history than one can imagine.  If you stop here, don't forget to dine at the "Hubble House" built in 1854 as a single story log hotel and was replaced by a three story limestone structure and achieved world wide recognition as a fine restaurant (still operating) and you would be amazed by the who's who that all stayed or ate here!
If you want to add your own rough before the next theme go here
http://writteninc.blogspot.com/2011/08/thematic-photographic-157-rough.html
Posted by 21 Wits at 8:08 AM 15 comments: